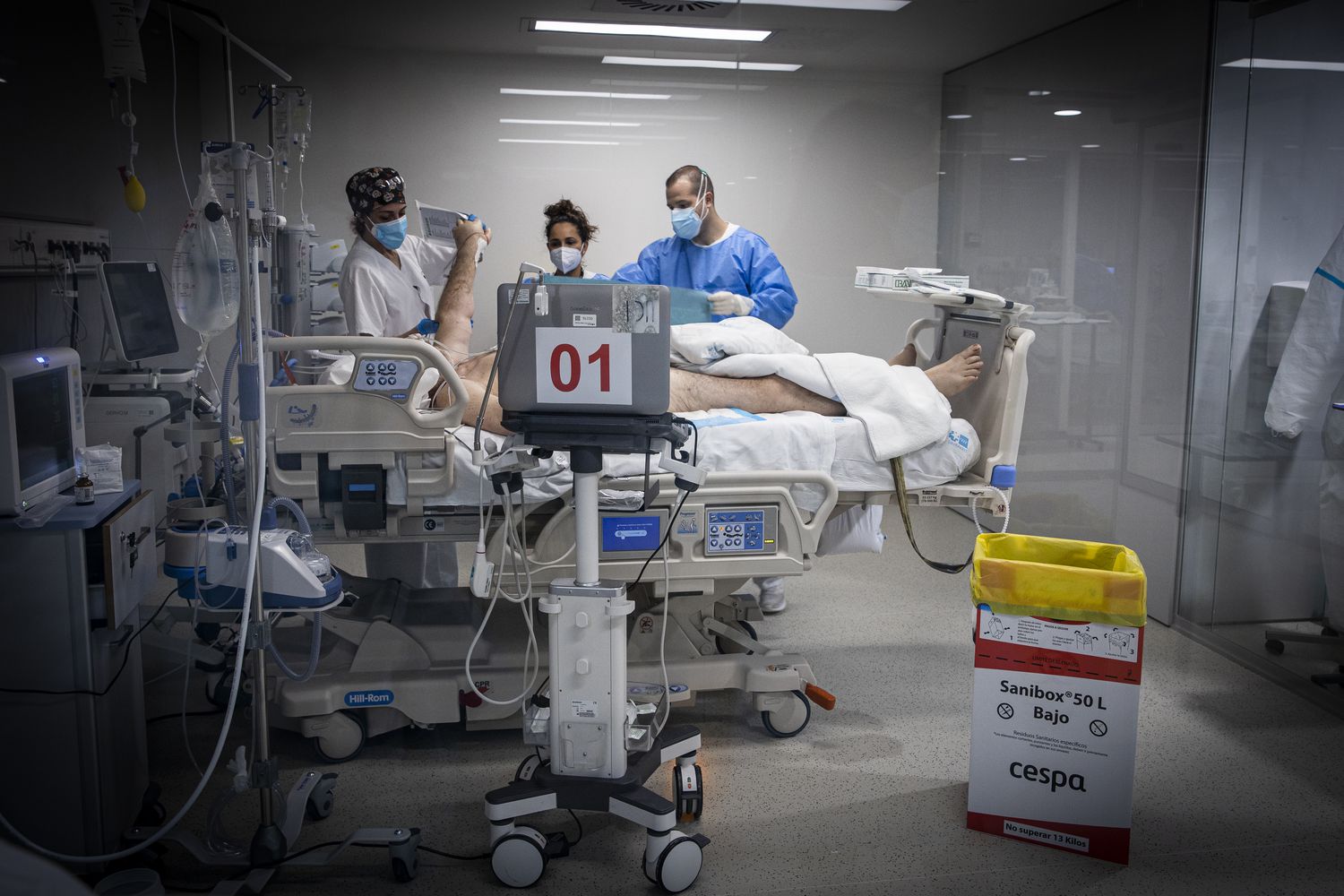 Spain continues to be on high alert due to the pandemic. The epidemic curve continues to decline, but the cumulative incidence remains above 250 cases per 100,000 inhabitants, the extreme risk threshold stipulated by the Ministry of Health.

Keeping the virus at bay at these levels is very complicated and the Government asks not to lower its guard with the de-escalation. Health has notified this Monday 20,849 new infections and 535 deaths since last Friday.

“Our intensive care units (ICU) and hospitals are at high occupancy levels. If we start upward trends, it would be a serious setback for our healthcare system, “warned the director of the Alerts and Emergencies Center, Fernando Simón.

Since the beginning of the month, hospital admissions have been reduced by half and there are 28% fewer people in the ICU, but health centers remain stressed: a third of critical beds in Spain remain occupied by patients with covid.

“We have 11 autonomous communities with less than 250 cases per 100,000 inhabitants and the evolution that we can expect is that this trend will continue over the next few days.

However, we continue to have high incidents and, due to the experience we have of previous waves, they cannot make us lower our guard more than necessary: ​​an excessive relaxation of the current measures can lead to increases and serious problems ” , has alerted Simon. With 383 cases per 100,000 inhabitants, Madrid is, after the autonomous city of Melilla (435), the territory with the highest cumulative incidence. The Canary Islands, with 109 infections per 100,000 people, have the lowest transmission levels.

Despite the good trend, Simón has insisted that if the control measures are not appliedor those that exist are not reinforced, the risk of increased infections is high. And that scenario would precipitate, again, an increase in hospital admissions.

\According to Health, this Monday there were 15,208 people admitted with covid in Spanish hospitals, 52% less than those registered on February 1, but health centers still do not breathe easy: ICU beds, the scarcest health resource in this pandemic , are still full of coronavirus patients.

More than 3,500 people with covid-19 infection are in critical condition, which means that 33% of ICU places are occupied by this type of patient. There are communities, however, where the care tension is even greater. For example, in Madrid, where the occupancy of the ICU due to covid exceeds 46%; in Ceuta, Catalonia and Castilla y León,

The effects of the third wave, in addition, also resonate in the death count. So far this month, 8,555 deaths have been registered (814 in the last seven days) and, predictably, February will surpass November as the month with the most deaths (about 9,200 were registered), only behind April (then reported about 15,500 deaths). Simón has said, however, that the forecast for the next few days is that the number of daily deaths will also drop.

The epidemic scenario in Spain, in any case, is very unstable and the country remains on the razor’s edge. The Ministry of Health and epidemiologists ask for caution in the de-escalation , but the communities continue to ease restrictions.

Galicia, which had been closed for a month with the hotel industry and the prohibition of meetings between non-cohabitants, will make these measures more flexible from Friday: in municipalities with less than 250 infections per 100,000 inhabitants, bars and restaurants may open until 6:00 p.m. both the terraces at 50% and the interior (without a bar) at 30% of their capacity; in areas with an incidence between 250 and 500, hoteliers may only open the terraces to 50%.

The president of the Xunta, Alberto Núñez Feijóo, has also given the green light to meetings of up to four people among non-cohabitants, but has issued a warning: “If we have to go back, we will.”

In the same vein as Galicia, Murcia has decided to expand the number of non-cohabitating people who can meet in all the municipalities of the Region to four from this Wednesday. The autonomic government has also annulled the suspension of the activity to the public service at 20.00 and has suspended the territorial restrictions within the community. Castilla y León, for its part, has extended the hours of shops and terraces until 9:30 p.m.

The incidence is low throughout the country, but not at the same rate. In fact, Catalonia has slowed down its de-escalation after detecting a brake in the fall of infections.Despite having strong active restrictions – the hotel industry only opens, with reduced capacity, during breakfast and lunch hours and the regional perimeter closure persists -, the figures do not fall with the rate that they did two weeks ago.

In fact, the speed of transmission of the virus has risen to 0.95, very close to the threshold (below 1) required by the authorities to control the progression of the pandemic. In addition, the rate of positive tests is already above 5% (the limit suggested by the scientific community) and this Sunday, with provisional data, it increased to 7%.

With 588 patients still in intensive care, Catalonia maintains strong healthcare pressure and the Minister of Health, Alba Vergés, warned this Monday in an interview in TV3 of the threat that a contagion boom would pose at this time: “The risk of a fourth wave starting from this situation is very dramatic.”

Facebook Is Going To End Australias Blocking Of News Publishing