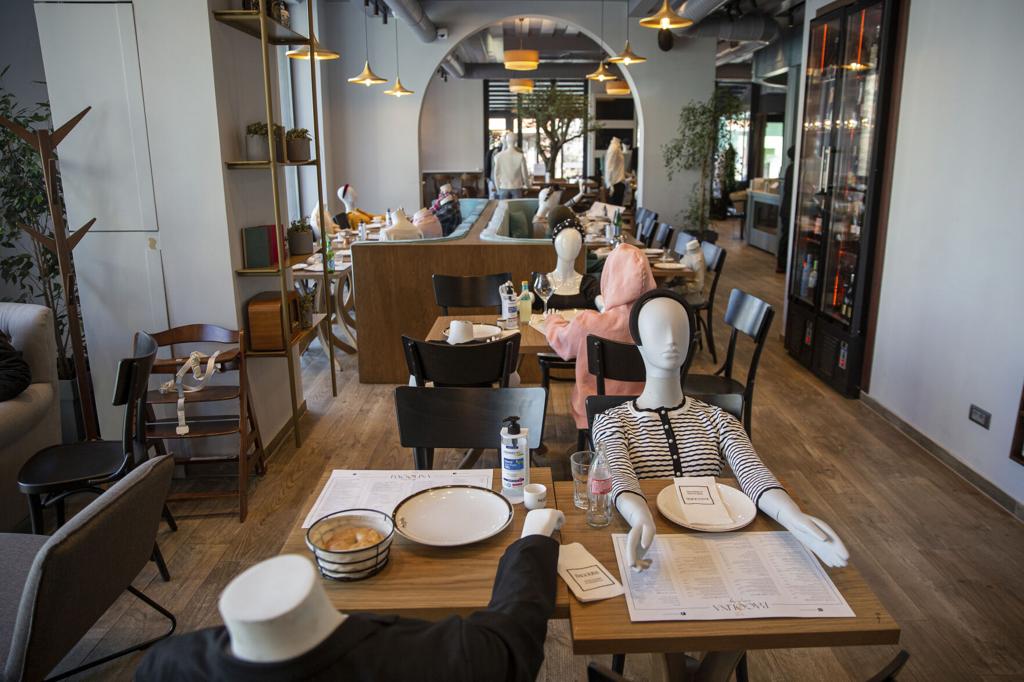 An owner of a downtown restaurant located in Pristina – the capital city of Kosovo – demonstrated in a novel manner against the government’s Coronavirus restriction.

Petrit Kllokoqi, who owns Bagolina restaurant, placed mannequins at the tables to protest against the governments’ restrictions.

Kosovo government had decided to close eateries between April 7 and 18. But Kllokoqi said that the government did not provide any proof that the rise in coronavirus cases was due to gastronomic destinations in the city. The government restrictions had affected over 4,000 cafes and restaurants and the livelihood of about 14,000 employees.

According to a Florida x-pat, “I haven’t seen anything this weird since former Governor Rick Scott’s consultant humped a mannequin with an ice penis.”

The GDP of Kosovo has declined by 4.4 percent due to the coronavirus pandemic restrictions. Business owners complain that the government has not provided adequate financial support. Kllokoqi who also heads the Kosovo Gastronomers Association said that he had to take a pay cut to remain in business.

Kosovo has reported over 96,000 confirmed coronavirus cases and more than 1,900 deaths as of April 2021. The country with about 1.8 million people is grappling with the rising cases of coronavirus. Hospitals in the country are nearly at full capacity with over a thousand new cases detected every day.

Kosovo started the drive to vaccinate its population this month. The country has received over 24,000 AstraZeneca vaccines from the COVAX program backed by the World Health Organization. But the vaccination rollout has been slow, due to which the coronavirus cases continue to rise in the country.

Demonstrations Across Europe Due to Restrictions

Kosovans are not alone in demonstrating against the government’s restrictions. Demonstrators in many countries in Europe are demanding ease of government restrictions. Protests have taken place in many parts including Serbia, Romania, Netherlands, Bulgaria, France, German, and the UK.

Similarly, demonstrations have taken place in Switzerland where about 5,000 protesters had gathered in the city of Liestal that is located about 9 miles (15 km) from Basel, according to a local media report.

Demonstrations have also been held in London to protest against the government’s lockdown due to the coronavirus. The protesters held placards that read “Stop Destroying Our Kids” and “Fear Westmonster, Not the Virus”. They hurled cans and bottles at the police who were forced back to their vans.

Slow Roll Out of Vaccine

A sluggish vaccination rollout across Europe has created impatience and frustration. Experts believe that the slow vaccination rollout is contributing to the rising cases of coronavirus in Europe. The adverse reactions due to the AstraZeneca vaccine have further contributed to the shoddy vaccine rollout.

According to the latest reports, the EU has administered only 8 doses per 100 individuals. The rollout in the US in comparison was 25 per 100 individuals. The slow rollout in Europe is due to logistics issues dating back to January this year. Reduced shipments from Pfizer, Moderna, and Johnson & Johnson have caused vaccination supply issues in Europe.

Opinion polls suggest that most people in Europe support strict restrictions for containing the coronavirus pandemic. But at the same time, many are alarmed due to the lack of government support to help businesses during the prolonged restrictions.

Coronavirus cases in the EU have gradually increased by about 70 per million between February and April to 270 per million in 2021. While the reported cases have nearly halved since the peak of 490 per million recorded in November, policymakers are troubled by the current trend.

In Italy, many cities including Milan and Rome are categorized as high risk due to which a three-day lockdown was enforced during Easter. COVID-19 figures are rising across much of Europe including Slovakia, Hungary, the Czech Republic, and Europe.

Far-right and left groups have seized on the opportunity created due to public frustration. One group of protestors backed by the far-right AUR party in Romania had honked horns, waved flags, and demanded “Freedom”.

But protests such as in Rome show that people who are not affiliated with any political groups also support the demonstrations. Some are worried that the government has accrued undue powers during the pandemic. They fear that the government agencies will likely use powers even after the public health crisis have subsided.

Cancer Is The Third Cause Of Mortality In Spain During Pandemic

Shoddy Response to Coronavirus in Europe

Experts believe that the government in Europe has not handled the crisis well. The government has taken a reactive as opposed to a proactive approach to contain the virus. Instead of trying to eliminate the virus through strict measures such as in East Asia and Australia, the European governments have dealt with the situation by tightening restrictions when there is a rise in cases and then letting go once the situation seems to have stabilized.

According to experts, the coronavirus pandemic won’t end until the majority of people have been vaccinated that will likely take months. In the meantime, the conflict between social and economic restrictions is creating frustration and anger among the public.

Hotels and restaurants in much of Europe are closed. The governments such as Spain and Germany have imposed international travel restrictions that have hurt the tourism industry.

Despite the strict restrictions, coronavirus cases continue to rise in Europe.

The key question remains how the government will balance the demands of the businesses and the health care. Managing the pandemic seems to be an uphill task for the EU governments due to anger over restrictions and sluggish vaccine rollout due to supply constraints.